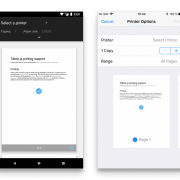 We are happy to announce the release of Tabris.js 2.4. This update adds features to Tabris.js:

With additional enhancements to the TextInput and TabFolder, the release should contain something for everybody. Full details can be obtained from the release notes.

The new widget RefreshComposite allows to perform the “pull-to-refresh” gesture on a simple layout hierarchy. The API and features are similar to the CollectionView but the usage is as simple as replacing a regular Composite with a RefreshComposite.

The following example lets the RefreshComposite show activity for 2 seconds.

Support for native printing has been added via tabris.Printer. Currently only documents in PDF format are supported.

A Printer has a method print(..) which takes the data to print as a ByteArray and an options object where a jobName can be provided. A native printing dialog will be shown where additional settings can be applied. The print(..) method returns a promise which resolves when the print job has been dispatched or throws an error otherwise.

A new “pinch-to-zoom” gesture can be used on an ImageView to magnify an image. To enable the gesture a new property zoomEnabled along with a zoomLevel, minZoomLevel and maxZoomLevel has been added. The properties also dispatch the expected change events when the user uses a gesture to zoom.

The resting position of a zoomed image is 1.0 with the minZoomLevel also on 1.0 and the maxZoomLevel at 3.0.

Added support for “next()” in layout references

Similar to the keyword prev(), next() can be used in a layout declaration. It references the next widget sibling in the parent widget after the current widget.

API additions for the TextInput widget

The TextInput gained two new properties to better integrate into the UI theme and to deal with passwords.

The TabFolder has received new events for tab switching. The appear event is fired on a Tab when the tab becomes the selected tab. Complementary, the previously selected Tab fires the disappear event.

In case the currently selected Tab is disposed, the TabFolder now correctly fires a selectionChanged event with the newly selected tab as the selection.

Create mobile apps with updated support for iPhoneX and a new NavigationBar...