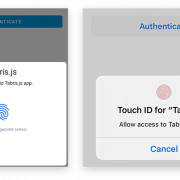 With the release of Tabris.js 3.7 we are increasing the security level of Tabris.js apps. Strong authentication mechanisms like a fingerprint, face recognition, and others can now be directly used in Tabris.js apps. Tabris.js 3.7 also supports private certificates in WebViews and increases app performance by allowing to generate hash digests with native implementations. Let’s continue with some more details below.

Providing a secure way to authenticate a user is crucial on modern mobile devices. While pin and password authentication is still a valid fallback, the usage of strong biometric authentication has proven more secure. With Tabris.js 3.7 we introduce a new service called authentication. 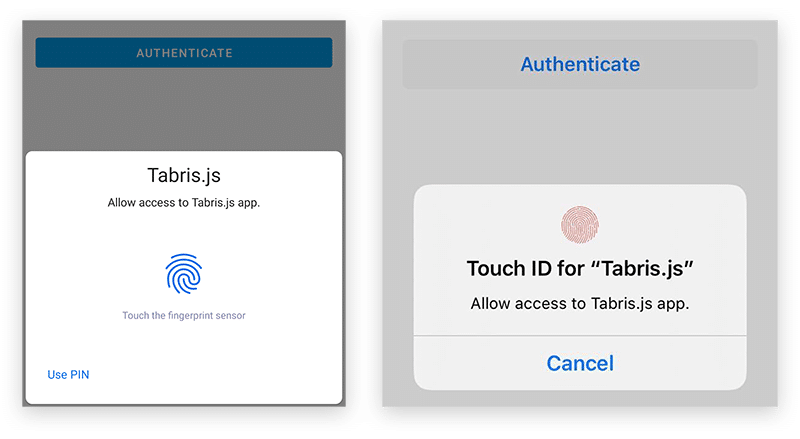 The authentication service allows querying whether a user is able to authenticate himself inside the app. He may use any of the registered device-wide authentication mechanisms like pin/password or modern counterparts like fingerprint or face detection. The snippet below shows how to consume this new API.

While Tabris.js had support for private trusted certificates for a while, we have now expanded that support to apply to the WebView. Certificates configured via the tabris.app.trustedCertificates are also honored in the WebView.

The digest() method of the W3C standard SubtleCrypto interface generates a digest of the given data. A digest is a short fixed-length value derived from some variable-length input. Cryptographic digests should exhibit collision-resistance, meaning that it’s hard to come up with two different inputs that have the same digest value. The snippet below demonstrates how to generate a digest.

Tabris now provides an implementation of the Observable API. It has been integrated in to the event system and is also RxJS compatible via their from method:

The callback beforeTextChanged on TextInput is fired when the text value is about to change due to a user action. This allows us to observe and potentially intercept text input. To block the inserted text you can use the common e.preventDefault() method. The following snippet demonstrates how to only allow integer number input into a TextInput.

The offset property on the CollectionView.reveal() method allows to shift the revealed position to a desired location. The offset shifts the targeted scroll position by a device independent pixel value. When offset is used, the targeted reveal scroll position will start from the top of the CollectionView. Applying offset will perform the reveal() operation without an animation, ignoring the animate property.

Set has been introduced in Tabris.js 3.6 but shadowed the existing Set class in JavaScript. To litigate this problem, Set has been renamed to Setter. An alias for Set still exists for backward compatibility.

Like to the existing apply method on Composite the apply instruction can now also be invoked during creation via declarative UI. This allows to create a CSS like syntax where all children of a Composite are effected accordingly. The snippet below demonstrates the feature.

The Setter function can also be used as a JSX element to set any attribute its parent. This includes listeners and callbacks, so for example the CollectionView JSX element could now contain it’s own cell factory:

We updated our Reddit-Viewer demo app to use the Model-View-ViewModel pattern. The @bindAll and @inject decorators have been tweaked in 3.7 to allow more consistent and flexible code. A typical MVVM binding can now look like this:/a>

Tabris.js – How to write unit tests