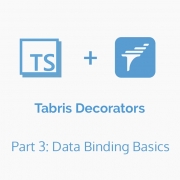 NOTE: This article is about Tabris 2.x. Some information is outdated when targeting Tabris 3.x.

In this article, we will cover how TypeScript decorators are used in the Tabris Framework to enable data binding for UI Components. It is a part of the blog post series dedicated to the Tabris.js extension called tabris-decorators, which makes developing mobile apps with Tabris.js 2.x and TypeScript more convenient. The extension features data binding capabilities, enhanced event handling, and dependency injection, explicitly designed for the Tabris mobile framework. To use it the npm module must be installed separately.

It’s recommended to read the previous posts in this series, though you may skip the first one.

In this chapter, we take a first look at data binding. The @component decorator allows for simple one-way and two-way bindings between a property of a custom component instance and a property of one of its children. This also involves the @property and @bind decorators and new JSX syntax, all provided by the tabris-decorators module

The story so far…

We will continue from where we left off in the previous chapter with the LabeledInput example. The current state is that we have a simple component containing a TextView and a TextInput. Except for the constructer it does not provide any API of its own:

However, right now the text property of the TextView is hard-coded to the 'Label:'. Next we will add a labelText property to the LabeledInput that will allow setting its value as a JSX attribute:

If the labelText property was final (cannot change after widget construction) it could be set via constructor parameter.

Simply add a new property to the class:

That makes the labelText part of the properties parameter of the LabeledInput constructor. Now we can set its value directly on the child element:

But that would mean that any changes to the labelText after a widget construction, would have no effect on the actual textView element. Data-binding solves this problem.

In essence, we want to be able to do this:

What we need here, is a one-way data binding which applies changes of the labelText property (the “base property”) to the text property on the “label” TextView (the “target property”). Since the TextView is not interactive, there is no need to have a “reverse” data flow that reflects changes on the target property back to the base.

One-way bindings first require a base property decorated with a @property, like this:

This makes the property eligible for one-way bindings. We could also initialize the property with the declaration, but in this case, we don’t really have a useful default value for it.

Next we establish the actual binding. The @component decorator enables a new JSX attribute syntax where an existing attribute of a child is prefixed with a bind-. The value of that attribute is the name of a base property to which it shall be bound. So in our case this becomes:

And voilà: All changes to the labeledInput.text will from now on be applied to the “label” TextView.

This is not all the @property decorator can do. It will pop up again in the next chapter on an event handling and in the second chapter on data binding.

Next we will add a property representing the actual text entered by the user. We will call it a text :

It differs from the labelText in that the value can change by itself due to user interactions. If we just used a one-way binding as above, this would not work as expected:

The text property would always provide the same value, even if the user has edited the text in the TextInput widget.

So here is where we need a two-way binding that keeps both base and target properties in sync with each other. This is accomplished by attaching the @bind decorator to the declaration of the base property:

The string given to the decorator takes a binding path which follows the pattern '#.

As a result we end up with a class like this:

Now, to prove that everything actually works, let’s write a mini form for entering your name. The result of the user input will be shown in a dialog.

That’s it with the basics of the tabris-decorators data binding features . The next chapter will deal with an event handling, continuing with the same example class.

Get Started with the Tabris Framework